He has the look!

He Has The Look! 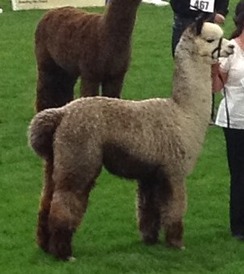 His fleece has aged beautifully. It is loaded with character, shine, and crimp. Just look at his mean curvature numbers! His density is evident just looking at him. His fleece has aged well and has maintained character with each passing year. He really shows some of the best qualities of his parents. Since he is the offspring of Tres Equis and Adoraross.

Adorarosa was a National Color Champion and a beautiful Lennox daughter. She had a short show career so that she could start producing right away, but she still took home the 1st place at Nationals.

Tres Equis has so many championships under his belt that I won't enumerate them here. Tres Equis was sold back east and breedings in the west are hard to come by. Trebicon is ready to fill his shoes!

We have not been able to show Trebicon like we had hoped because of a busy schedule that hasn't allowed for it! We only wished we had had the time to give him the opportunity to take home the championships he deserves!

Trebicon's first three crias are on the ground! The first was a modern Rose Grey out of an Avatar Daughter. The 2nd was a Medium Rose Grey out of a medium fawn girl. The third has a solid gray blanket with another solid brown girl. He threw the Trifecta in grey in his first year of breeding!

Tre's first cria in 2019 is on the ground. No surprise - another gorgeous rose grey girl! He is consistently throwing his color - at this point, it's absolutely uncanny!

Financing Terms We are happy to offer financing options on regular priced alpacas. Please call to learn more. Auction Prices = under $2000.00 = cash only. Over $2000.00 = 1/2 down with equal monthly payments for a year with no interest. 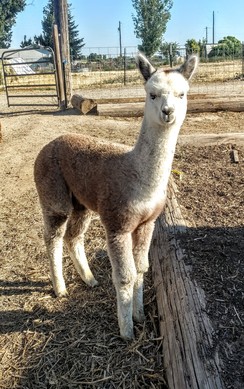